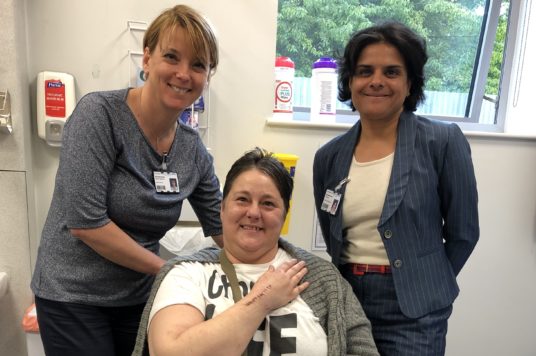 Julie Richardson, 43, from Croydon is the first ever patient to receive a total wrist replacement at St George’s hospital in Tooting.

St George’s is one of the few centres in the UK to offer this type of surgery, which is more complicated than a hip or knee replacement due to the complex structure of the wrist joint.

Before surgery, Julie was in constant pain after being diagnosed with Kienböck’s disease – a rare, debilitating condition which develops when one of the central bones in the wrist loses its blood supply. As a result, the bone dies and begins to crumble away, causing chronic pain and arthritis.

A total wrist replacement was recommended to relieve Julie’s pain while preserving motion in her wrist and hand.

Julie said: “The first sign of Kienböck’s disease was when my wrist became swollen and stiff about five-years ago. I struggled to bend my wrist and it became really painful to do simple tasks such as doing up buttons or picking up anything too heavy.”

On average, a new wrist joint can be expected to last 10 to 15 years with careful use, compared to 20 years or longer for a new hip or knee.

“A total wrist replacement is a complex operation which requires enormous precision to ensure the new joint is correctly aligned and well balanced. Traditionally, the only surgical option available has been to fuse the wrist, which removes the pain but also restricts wrist-movement. It’s excellent that we’re able to offer this type of surgery at St George’s, allowing Julie to use her hand again after years of pain.”

“Wrist replacements are a great option for people who aren’t going to be doing heavy work, as the implant will wear out quickly if it’s subjected to excessive load.”

She added: “Julie will have to do regular exercises under the guidance of the Hand Therapy team at St George’s to re-gain strength, full motion and function but we’re already thrilled with the outcome. After just 10 days post-surgery it was fantastic to see Julie moving her wrist again without any pain.”

Julie commented: “I’m delighted with the result and so grateful to Miss Umarji and the whole team at St George’s who were involved in my surgery and aftercare. For years I struggled to do everyday tasks, so to have a wrist I’m able to move again is really life-changing.”

“The consultants explained to me that it was going to be the first-ever time they’d carried out this type of procedure but it didn’t worry me at all – I trusted them and knew they wanted it to be a success just as much as I did.”

Covid-19 pandemic has led to almost complete disruption of healthcare provision in the private sector over the last few weeks.

Very pleased to have participated at the BAPRAS Winter Meeting with my own study at the upper limb section of the Congress.

In collaboration with the MHRA, ABS and BAAPS, BAPRAS has recently announced a joint Association perspective on Breast Implant safety.

We use cookies to ensure that we give you the best experience on our website. If you continue to use this site we will assume that you are happy with it. Read more