Surgeons save man’s hand after seventeen hours of surgery

A superb team effort in saving a carpenters hand after an amputation with a circular saw – proud to have been a member of this group. 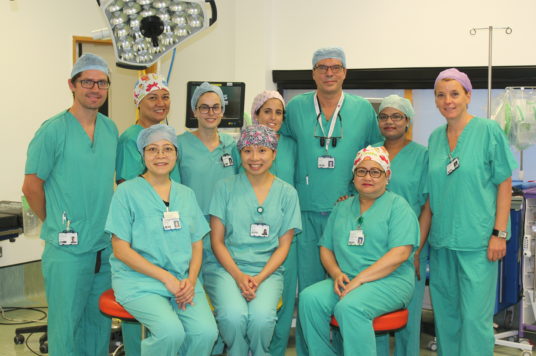 Plastic surgeons at St George’s Hospital in Tooting have saved a man’s hand following seventeen hours of surgery, after a chop saw accident resulted in a double-level amputation.

Anthony, 46, from Walton-on-Thames, feared he would lose his hand after catching it in a chop saw while cutting flooring on Thursday 30 May. X-ray images before surgery (top) and after surgery (bottom)

Mr Adlard said: “When we took him to theatre I realised it was much worse than I’d first thought. It had been described as a sub-total hand amputation, which was true, however it had it been cut off almost completely in two places – at the base of his palm and again just below the fingers –  resulting in a double-level amputation.”

“I knew then that it was going to be a very long operation and if I proceeded on my own then the chance of saving all five fingers was slim. Time was also against us; his detached fingers were getting warm and left too long without blood they would rapidly decompose and be impossible to re-attach.”

“I’ve done maybe three or four hand amputations in my lifetime – most units will see one or two every year. I’d say it’s probably the most complex amputation I’ve had to deal with. There are many surgeons who, once they’d seen that level of injury, would think it was unsalvageable.”

Mr Adlard called his colleague, Miss Farida Ali, who is also a plastic surgeon and specialises in microsurgery. She was at home and not on call but immediately agreed to help when she heard of the severity and complexity of the injury. The two surgeons worked through the night to save Anthony’s hand, finishing at 9am the next morning. 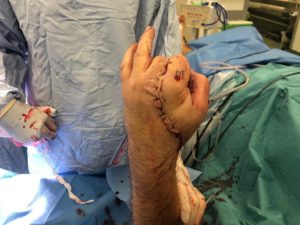 Mr Adlard continued: “In that first operation I wanted to re-attach and get blood and nerve supply to as many of the fingers as possible. After fixing the broken bones we harvested nerve and vein grafts. This involved taking veins from his foot and nerves from his forearm and using them to bridge the gaps between the structures in his hand.”

“If it was a straight single cut it would have been much easier. We would have been able to join things directly together instead of having to take parts from elsewhere to replace the swathe of tissue that was missing.”

“Farida and I took it in turns, with one of us taking veins from his foot and the other stitching the veins to arteries in his hand using a microscope and a very small needle. Every microsurgical repair takes a lot of concentration, so it was useful to be able to alternate between two surgeons. We did the same thing for his nerve grafts harvested from his forearm and I repaired any tendons that I could.”

“Following the operation, we noticed some of the skin on his palm wasn’t surviving and what’s more, his middle finger had insufficient bone stability or feeling to it, so we made the decision that to save the rest of his hand, we’d sacrifice his middle finger and effectively fillet it to help reconstruct the skin and bone which was missing from his palm. This was performed by my colleague, Miss Sonja Cerovac.”

“The next problem was there wasn’t enough skin to cover the exposed delicate microvascular repairs in his palm, so we decided to attach his hand to his groin to borrow skin from there. This procedure is called a pedicled groin flap and was performed by another hand surgeon, Mr Jamil Moledina.”

“Mr Moledina cut a section of skin in Anthony’s groin and lifted it like a flap to cover the missing skin from his hand. It was sewn in place and left there for two weeks. Eventually the skin from his groin grew new roots to where it had been transferred to his hand and we were able to cut his hand free.”

Anthony lost a lot of blood at the scene and doesn’t remember much about his accident.

Anthony said: “I threw myself off the saw. I don’t know whether it was my brain playing tricks on me, but it was like an out of body experience; I could see myself and see what I’d done. There was blood spirting out everywhere.”

“All I remember was coming through the doors into A&E and being greeted by a phenomenal amount of people; I couldn’t count them.”

“The care I’ve received has been fantastic and I’ve got so much gratitude for everyone; from the paramedics who were first on the scene to the staff working in the intensive care unit and on Vernon Ward at St George’s. Words can’t describe it because I was expecting to wake up without a hand. It’s just trying to get it to work now. It’s unbelievable really, I’m so grateful.”

Mr Adlard said he never makes any guarantees to patients in these circumstances but always promises to do the best possible for them.

He said: “I always tell them that we’re going to take them to theatre, do the best we possibly can and prepare them that there’s a chance they may wake up without the limb that’s involved. Until you actually get to theatre, you never know for sure how it’s going to go.”

Incredibly, Anthony has already regained some movement in his hand. He has regular sessions with St George’s hand therapy team – a group of specialist physiotherapists who are helping to rehabilitate his hand. Millie Chu, Hand Therapist said: “When I first met Anthony his hand was incredibly sensitive to light touch which would cause severe pain. After just one month he is now able to tolerate his scar massage and exercises much more.”

“We will continue to work on his function, particularly focussing on achieving pinch grip through various exercises and splinting. Rehabilitation can be challenging but Anthony has shown great courage and motivation by already demonstrating great improvements.”

Commenting on what makes this type of surgery possible, Mr Adlard said: “St George’s is a world-leading trauma centre and our surgeons are experts in their fields. We’ve also got a very good plastic surgery team who work well together. This case shows it’s always a real team effort.”

I was delighted to participate in Advances in Hand Surgery Course which connected virtually so many surgeons, trainees and therapists over the last 3 days.